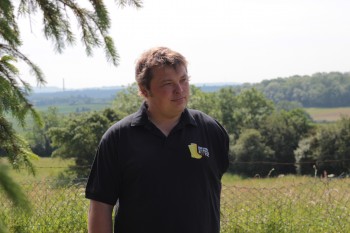 An interview with James Chapman

This week marks our second Farm Safety Week, an occasion we are marking with the “Who would fill your boots?” campaign. We are delighted to be supported by four Farm Safety Ambassadors, helping us to raise awareness of the prevalence ?zgür of farm safety accidents and encourage the rural community to adopt safe farming practices. James Chapman suffered a farm accident in 2005 and was awarded an MBE in 2012 for his services to farm safety. Here he tells IP us about his experience and his message for other farmers.

On the day the accident occurred, James’ work had not been going to plan. He was under pressure, and in a hurry – sadly very familiar circumstances for many farmers.

The attitude on the farm was to get on with things – if you couldn’t or wouldn’t do a job, someone else would be found who could. James was asked to empty underground tanks of water, using machinery he had never used before, which was in a poor state of repair. He realised the machine didn’t seem to be operating as it should, and decided to check it, but came too close to an unguarded PTO shaft. Suddenly his clothes were entangled, leading to the loss of his left arm.

We can all say that we wouldn’t make unwise decisions, but to in reality, under pressure, good practice can slip. James did something he wouldn’t normally do – but he had always thought that accidents were something that only happened to other people.

Similarly, machine maintenance, though relatively inexpensive, can be overlooked in the face of what are sometimes seen as other more pressing needs. “It’s not Jon until someone has an accident that you realise something cheap nfl jerseys has to be done,” wholesale jerseys James says, before recalling that very quickly after his accident the machine that caused his injury was serviced and repaired.

So can we get farmers to place safety first, when many are barely keeping their heads above water financially, battling against time and weather, and working long, tiring hours?

“Farmers love their jobs,” argues James, “that’s why they put up with the pay and the long days. Sometimes the last thing on their mind is safety Your – to take the necessary steps to make sure that they come home safe.”

He thinks the key is raising awareness – which is exactly why he’s involved with the Yellow Wellies campaign. “You’ve got to slow down –look at what you’re about to do before you go diving in. Take a minute to assess the potential danger.” But what if you’re a younger worker feeling pressured to work in unsafe wholesale mlb jerseys situations? “It’s about having the guts to stand up and say to the boss – that’s not safe, I shouldn’t be doing that – if you want to do it, crack on!”

He also wants farm Semineri workers to also stop and consider the impact of accidents on others. “NFU Mutual’s message is a good one – who would will your boots if you weren’t about? How would they cope without you? Look around – how would your family feel if they got that phone call; your kids, your wife? What would your son or daughter say if they had to attend your funeral?”

stephanie_berkeley_zl4u2oa9‘How Would Your Family Feel If They Got That Phone Call?’07.01.2014