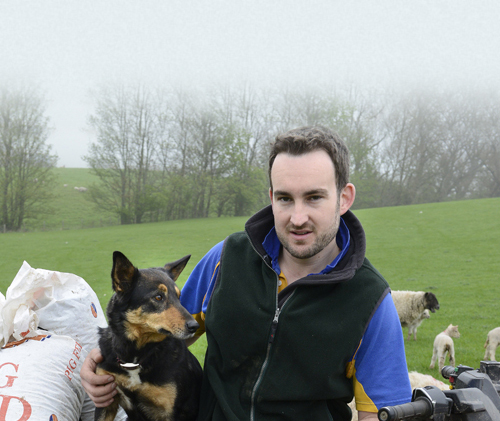 After losing his foot in a farm accident involving a quad bike and a shotgun, Farm Safety Ambassador Mark Mather from Haugh Head, near Wooler, Northumberland is keen to highlight the harsh reality of the consequences an accident like this can have…

Mark was 24 when, in June 2008, he suffered a shotgun blast to the leg while working on the 2,500-acre mixed arable and livestock farm.

Mark had been involved with the family trade from his late teens and had completed a business course before leaving school to prepare him for the financial side of farming.

It was while ploughing a field in readiness for a kale crop when he noticed that the barley crop in the next field was being plundered by crows.

Mark returned to the house in the early evening, collecting his shotgun before heading straight out again on a quad bike which had a twitching device of decoy birds on its front rack to attract crows so they could be shot. He was carrying the double-barrelled shotgun across his lap. It was loaded, but the safety catch was on.

Mark journeyed about a quarter-of-a-mile from the farm to the first field, where he took a couple of shots, but then decided to move on to the next field. As he turned into the field, the battery powering the front-mounted twitcher moved slightly and he leaned forward to secure it.

As a result, the vehicle veered onto a slight bank and overturned, hitting the butt of the shotgun which went off, firing both barrels into his right leg. Mark was conscious, in great pain and losing a lot of blood, but he couldn’t get up and couldn’t call for help because the battery in his mobile phone was flat.

Luckily Mark’s father received a message to say that some sheep had escaped and the search for the sheep led him to where Mark was lying beneath the quad.

With the local air ambulance unavailable, RAF Boulmer came to his rescue and airlifted Mark to hospital where surgeons operated throughout the night, but were forced to amputate the leg at the thigh to save his life. Mark endured four or five further operations every other day during the following weeks.

The impact on Mark’s life and the farm business was immense. He was unable to work for over a year and on his return to work still suffered pain and weakness. But the consequences of this tragic accident did not stop there. The accident also put the family and the farm under major financial strain.

Neighbours were very good and came in to do the silage for us, explains Mark:
My father visited me in hospital every day and so his work time was lost. He had to hire in extra help during the considerable length of time I was unable to work. Because my injury is so severe it means there are certain aspects of the work I can no longer do. I have lost a lot of mobility and working with livestock is no longer possible. We have had to buy a specially adapted tractor which has been fitted with a left foot accelerator and I have a similarly adapted car and 4×4 vehicle.

It has hit my parents very hard. My Dad did not go shooting at all that year, which is something that he would normally enjoy.

The 31-year-old admits: “My accident not only put safety awareness to the fore on our own farm but on surrounding farms when friends and neighbours heard about it.

I am prepared to talk about what happened to me if it helps prevent others suffering this kind of incident. My advice is to think twice before you start a job.