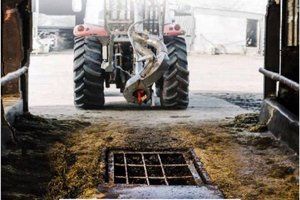 Please don’t take any chances when mixing slurry – you are risking your own life and the lives of others as well as putting your livestock in danger.

With the closed period for spreading slurry ending at midnight on Friday 31 January, the Health and Safety Executive for Northern Ireland (HSENI) is urging farmers to take extra care when mixing slurry.

Mixing slurry can be a particularly dangerous job as the gas is released very quickly, and in large quantities, as soon as the mixing starts.

The first 30 minutes are the most dangerous, so it is important for farmers to leave the shed as soon as the mixing starts – and to stay out for at least 30 minutes.

Over recent years, incidents involving slurry have tragically claimed the lives of a number of people in Northern Ireland, including that of a child.

Appealing to farmers to follow the available safety advice at all times, Malcolm Downey, who heads up the farm safety team at HSENI, said:

“Before mixing slurry, always stop and think about the job ahead and plan to do it safely. Cover all the openings and keep children and animals well away during the mixing process – and stay out of the building for at least 30 minutes after the mixing starts and every time you move the pump or change the direction of mixing.

“Please don’t take any chances when mixing slurry – you are risking your own life and the lives of others as well as putting your livestock in danger.

“Always follow the slurry mixing code and remember that with slurry gas, just one breath can kill.”

For more information about working safely with slurry or general farming health and safety issues please contact the HSENI helpline on: 0800 0320 121 or visit: www.hseni.gov.uk/farmsafe