Just before Christmas, singer Jesy Nelson made a powerful statement by quitting the biggest girl band in the world – Little Mix – after nine years: it’s okay to prioritise your mental wellbeing over a job, even if it has always felt like your dream career.

The decision to leave a job for the sake of your mental health is a massive one, that comes with the weight of shame and guilt.

Stress and anxiety can make you feel tired, empty, weak, incapable and unsuccessful. If someone breaks their leg playing five-a-side football, the person will dine out on the tale about how it happened. Everyone will offer their best wishes for a speedy recovery and check in with the injured person every so often. However, when it comes to mental health matters, there seems to be a discomfort and reluctance to talk about it. There is an underlying shame when talking about depression, burnout and anxiety. This makes the situation worse, causing the person to feel even more alone with no one to turn to. 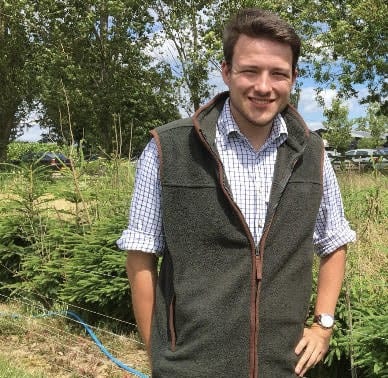 One young farmer who can identify with this feeling is 23 year old Dan Goodwin from Suffolk. As a child, Dan had dreamed about being a farmer. When he turned 18, Dan moved from Bury St Edmunds and attended a land-based college in Norfolk. Throughout his studies, Dan enjoyed learning and the structure that his apprenticeship with a small family-run farm gave him. When this ended and he started working full time on the farm, Dan found himself without a structure and support and his mental health started to slip.

“Three years on, reality started to bite. We were a very small team, and constantly spoke about Brexit. At the time, when it was all going through, it became clear that it would have a massive effect on smaller farms like ours. On that farm, we’d try and work around how we’d look at the farm on the future, when we wouldn’t have EU and government crop payments. It gave me the worst anxiety.”

“The world as it was at the time meant that no one was talking about poor mental health in the industry. It was never mentioned at college. The doubts I was having, the bad days and yes, I’ll admit it, the suicidal thoughts I was having then felt almost normal. Now I realise that they weren’t.

“I switched jobs twice in my last year in the industry. In my last role, the isolation and loneliness really got to me. It was long hours and a lot of responsibility. During the season, we’d start at 7, and finish at midnight or 1am, and did that seven days a week. We had radios and stuff on, but you don’t have anyone face-to-face. You just sit in your tractor and keep going and going.”

Dan was living away from home, he missed his family and missed his partner. Over those four years, the anxiety and depression had been building and in August 2019, Dan attempted suicide. As he explains: “It was when that happened, I told someone that I needed help. Within 24 hours, I was with a doctor, and I had decided I couldn’t stay in the job any more.”

“I can remember that day clearly. I woke up, next to my partner at the time, and I felt 100 per cent better. I was with the people who meant the most, and the burden had just been lifted off my shoulders.”

As Dan says: “Not everyone is as lucky as me. I have family who I love and love me unconditionally and a best friend who has been my saviour. I still have, and need, the support from doctors. It’s not something that will change overnight, but I’m making progress, and it’s good to feel like I’m on the right track.”

Dan has now left farming and has been working in hospitality in a job he loves. Of course, since March 2020, this has changed but Dan knows he has a good circle of people around him and has been building his resilience so he can recognise the signs when his mental health is slipping and he needs to get away.

“In 2015, people didn’t talk openly about mental health. I’ve been working with the Farm Safety Foundation as an ambassador for a while now and together, we are letting people living and working in the industry know that, thanks to technology and the widespread use of social media, we are more ‘connected’ than ever before. Yet, we can be more lonely. And loneliness can kill.”

The Foundation’s research tells us that 88% of young farmers now rate poor mental health as the biggest hidden problem faced by farmers today (an increase from 81% in 2018) and Dan hopes that, by being open and honest about his struggles, others will be encouraged to do the same.

“When things get too much, being outside, with animals and especially horses, is what calms me, helps me focus and brings me happiness. I’ll always love the countryside even if a career in farming isn’t for me. There is no shame in admitting that you need help and there should be no guilt in taking back control of your career and your life.”