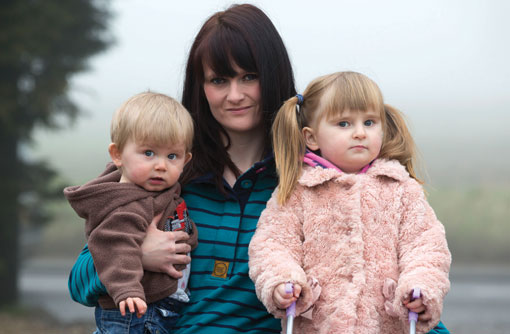 This week marks our second Farm Safety Week, an occasion we are marking with the “Who would fill your boots?” campaign. We are delighted to be supported by four Farm Safety Ambassadors, helping us to raise 2014 awareness of the prevalence of farm safety accidents and encourage the rural community to adopt safe farming practices. In 2011 Craig Whipps was involved in an accident which took his life and also that of his colleague Paul Gray. Here we speak to Craig’s widow Victoria Whipps, who is passionate to make a change.

With a series of slurry-related deaths and accidents having occurred since 2011, the most recent being the death of an eight-year-old school boy from County Antrim in June, it seems that something drastic must be done in order to prevent yet more tragic incidents and needless loss of life. Sadly Victoria recognises that her Safety story is not unique – she has much in common with many others whose lives have been devastated by incidents on farms.

Three years ago her husband Craig was working on a farm in Essex, emptying a storage tower full of slurry into a tank below. He noticed that the slurry was too thick, and there was an issue with the escape valve on the front of the tower. He mentioned the problem to his employer, and took the matter into his own hands. He opened the first valve on the system to check for blockages, but was sadly unaware that cheap nfl jerseys the second valve, built in for safety and usually a metre back from this, had been removed. Thousands of litres of liquid slurry came pouring out at a high pressure over wholesale nba jerseys Craig. His colleague sounded the alarm, trying to pull him free. Others attending the scene were knocked out by the hydrogen sulphide gases. Another worker, Paul Gray, attempted Отличные to save Craig by going around the back of the tank, but he was later found drowned in the slurry.

Victoria is worried that current safety messages are falling on deaf ears, and is passionate about finding ways to prevent similar accidents happening in future.

“This stuff needs to be in the news, in farming magazines. People need to be taught about the risks, and to see the human cost of having faulty equipment. My two children will grow up without their Dad – he was Memorabilia only 27 and that is no age at all to die. We double can’t close our eyes and pretend things are fine – look at the stats from the HSE. Something has got to change,” said Victoria.

So how can the industry change? Victoria thinks that formal risk assessments of farms should take place on a regular basis, to check that machinery and equipment is being maintained appropriately. But risk assessments need to be workable for everyone, and not just involve more “red tape” such as forms and paperwork. They also have to include signs on equipment, safety measures such as gas monitors, and safety drills, and all staff having the right training to work with machinery.

Safer ways of working need to be adopted – Victoria suggests that if there’s no incentive to do that despite the high number of accidents, perhaps fines should be introduced to ensure that unsafe environments and practices are addressed and not ignored.

And it’s not only training on machinery that’s needed – workers should know what to do should an incident occur. Victoria wants to see training cheap jerseys in college curriculums that addresses specific scenarios such as slurry accidents to ‘How reduce fatalities. “It’s human nature to jump in to save someone in trouble. Paul laid his life on the line trying to save Craig, and paid the video ultimate price.

Would you know what to do in the event of a catastrophic incident?”

stephanie_berkeley_zl4u2oa9‘We Can’t Close Our Eyes and Pretend Things Are Fine’07.01.2014